Note: I wrote this recipe “Roasted Squash with Toasted Sesame Seeds & Golden Raisins” as part of a bigger feature in Edible Boston’s Winter 2021 issue. The feature focused on vegetarian recipes that are straightforward, easy, and feature local winter produce. You can see the feature here on Edible Boston, as well as an edited version of the article published in their print magazine below- in particular, I feel like understanding the “why” behind this recipe was key AND how I hope it’s used/read.

It’s just not as easy to love local produce in the winter. The glamour of tomatoes and peaches is hard to compete with. But if you explore and get creative, winter produce can be just as colorful, rich, and delicious. I wanted each recipe to be like a blind date: a time to get to know a single vegetable- and maybe in a way you hadn’t considered before. (P.S. This recipe: all about the hearty greens. In particular, I wanted to utilize their stunning green color to infuse both color and flavor into rice.)

In my early days of cooking, I felt obligated to strictly follow recipes, even if that meant buying spices that just collected dust in my pantry. Over time, I began to think of recipes more like a template with suggestions. If a recipe calls for a bunch of different herbs, it’s okay if I only have a couple of them. While this philosophy was somewhat born out of practical constraints, it also made cooking less stressful- to the point of being fun. I had room to play and be creative.

So I encourage you to see these recipes as a starting point. Try swapping out a spice or two based on your personal taste. You may create something even better (and other times not- but it’s just a single meal and still worth trying). As a teacher, I know that some dive into this flexibility and experimentation, while others find it daunting. If you find yourself on the “I follow a recipe to a T” end of the spectrum, be sure to read the description for each recipe. I give specific suggestions and ideas on where there’s wiggle room to experiment. The more you make it your own, the more likely you are to make it again.

“Will you make it again?” is always my first question when assessing a recipe and my ultimate goal. It sounds obvious, but this question considers both the final product and the experience of making it. Have you ever finished a recipe, only to stare and wonder if a tornado just went through your kitchen? For me, the final straw was a stuffed pumpkin. After an inordinate amount of steps, the pumpkin was finally in the oven. And then I stepped back and saw the number of bowls and utensils to clean. Even if it was delicious, I knew I probably wouldn’t make it again, or at least not anytime soon.

Luckily, a recipe can have minimal ingredients, equipment or steps while still being creative and bold in flavor. While we often have our go-to flavors, I’ve found the key to consistently cooking most nights and not getting in a rut is mixing it up. So enjoy this collection of cozy vegetarian recipes that features a wide variety of flavors, textures, and aromas while also fitting into your busy schedule.

Recipes in this Feature:

Roasting brings out the naturally sweet, caramel-like flavors of winter squash and can be used on almost any winter squash. The cook time will vary depending on the type of squash, but my favorites for this recipe are delicata and kabocha squash (especially because you can don’t have to peel them).

This dish is made up of several components and is purposefully flexible. When making this myself, some components are a must and I always include because they MAKE the dish. Other parts I sometimes include and other times not, depending on mood and how filling of a dish I want this to be.

While I’ve seen sumac becoming more widely available and you may be able to find it out your grocery, urfa is a bit harder to find in American Grocery stores. I found it at local Boston bakery Sofra and have been using it in a variety of dishes to get to know it. Sumac has a slightly tart and fruity taste and is commonly used in Middle East. Urfa is a Turkish pepper. Its flavor is similar to sumac in that it’s also a bit tart and fruity. But in brings the heat! I personally really like it because it was a more subtle heat.

If you can’t find these spices, omit the mint and add in a pinch of cinnamon and chili flakes. While these spices aren’t a substitute, they also add a touch of sweetness and heat and pair well with paprika. 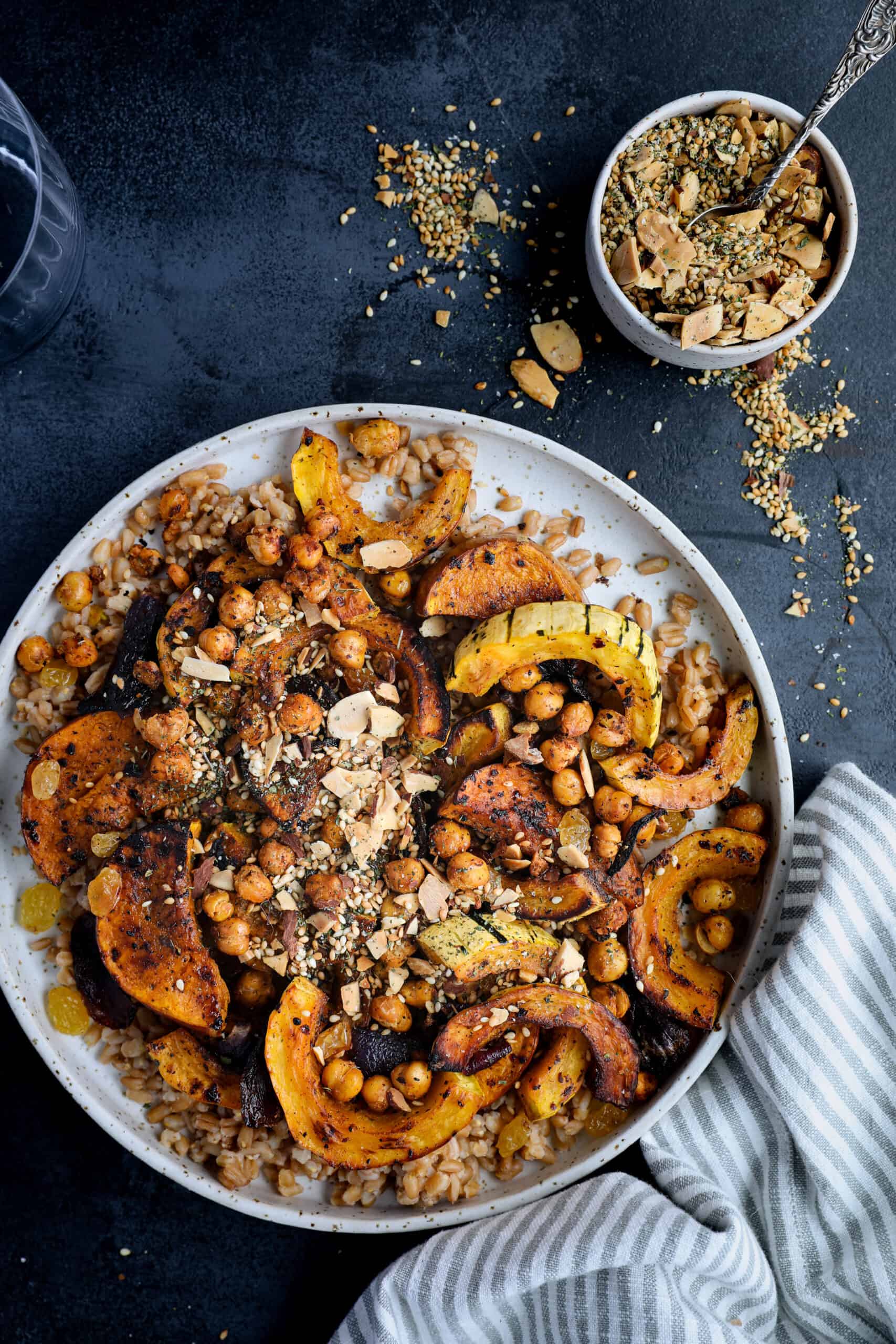 Spice Mix: (*be sure to see note above if you're struggling to find these spices)

Roast the Squash (and option to roast chickpeas):

No ratings yet
Share Email Pin Recipe
Tried this recipe?Mention @Kate_Cooks_ or tag #katecooks!
Print Recipe
No ratings yet

I highly recommend doubling this recipe so you have a big batch of farro to use throughout the week beyond one recipe (it’s great in salads and even soups).
Servings 2.5 cups
Cook Time 35 mins
Total Time 40 mins
No ratings yet
Share Email
Tried this recipe?Mention @Kate_Cooks_ or tag #katecooks!