Savoring every last heirloom with these Spiced Jammy Heirloom Tomatoes & Shallots. It’s an easy and casual dish that packs a punch. This method of lightly sauteeing tomatoes keeps their integrity and freshness while intensifying their flavors and creating a melt-in-your-mouth texture. If you like bold and flavorful dishes, this one’s for you. Whole spices and anchovies give this an umami salty pop and balance out the sweetness of the tomatoes.

The source of inspiration for this Spiced Jammy Heirloom Tomatoes & Shallots is a fusion of old favs and new methods I’ve come to really enjoy over the summer. The old fav: panzaenlla-style salads and anything with toasted bread (and heirloom tomatoes). The new method: cooking with anchovies to add a salty dimension to sauces (thanks to Alison Roman). The revived inspiration that I’ve played around with before, but not for a while: using whole spices. Ever since having a delicious home-cooked Pakistani meal that had heavy amounts of garlic, ginger, coriander, cumin, and chili. I decided to use seeds I already had on hand from other recipes: mustard seeds, cumin seeds, and coriander.

The best part about these Spiced Jammy Heirloom Tomatoes & Shallots is the mix of bold, salty, umami-ish flavors with the sweetness of the tomatoes. Sometimes I find tomatoes a bit too sweet; here they are balanced out and while the dish still has a natural sweetness, it also has a lot of other flavors going on.

After making this several times, I found that I could play with the cooking time to create two completely different dishes. Both have the same spices and same initial steps, but differ in how long the tomatoes cook with the onions and spices. The panzanella style side keeps the tomatoes mostly uncooked. A quick toss in the spice mixture for about a minute warms them up while keeping them whole. They don’t break down or release their juices. The stewed style cooks down the tomatoes more. As the cook, they release their juices and break down into a jammy mixture that mixes salty and sweet. The more they cook, the more intense this effect.

While I like both methods, I lean toward the stewed style because it’s more versatile and works for leftovers. I like to toss them with a fried egg, white rice, or other roasted veggies for a kick of flavor. 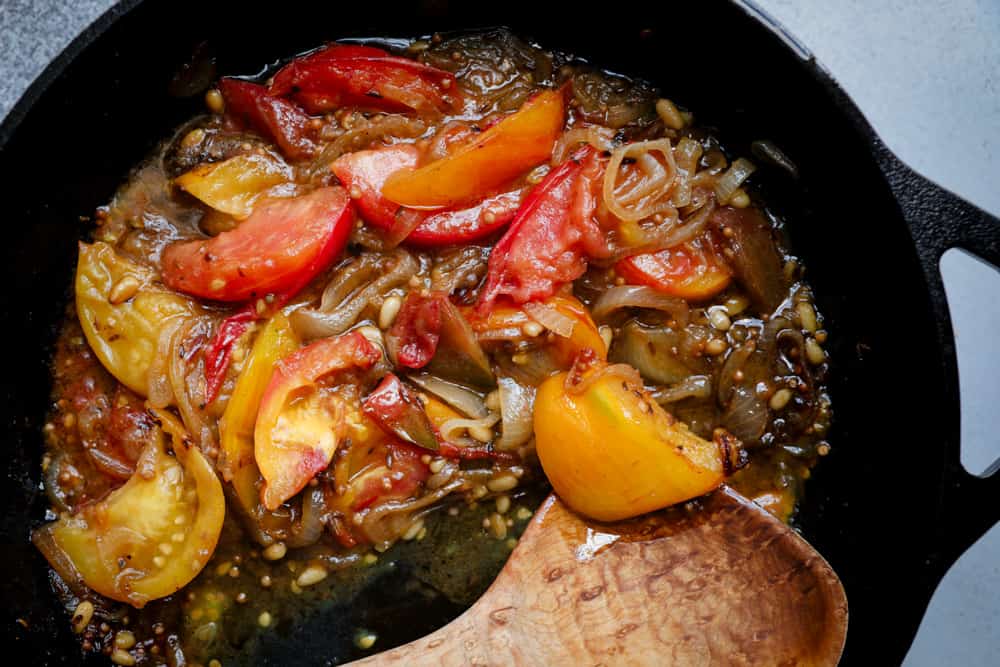