I’ll be honest- I wasn’t a huge gnocchi person until about three years ago when I had really good gnocchi at Iron Gate in Washington, D.C. They’re like light pillows of heaven when done well. Then I tried making sweet potato gnocchi a few years ago and well. It was a disaster. They were dense and shaping them was… less than ideal.⁠ So this Basil Pesto Gnocchi has been a recipe in the works for quite some time. Having made a number of so-so batches of gnocchi, I’ve included all my tips for homemade gnocchi in this post too.
⁠

We were lucky enough to make homemade gnocchi when in Italy this June. It was actually perfect timing because I had recently tried out a recipe from America’s Test Kitchen. It turned out well, but I was curious to see how it stacked up to a more traditional approach in Italy.

In particular, there were a few things I picked up on in Italy that this recipe includes. First, the use of 00′ flour. If you’re familiar with any type of traditional Italian cooking, this type of flour is probably familiar. It’s used in most Italian pasta and pizza dough recipes. It’s similar to all-purpose flour, but has a finer grain and texture. This results in a lighter, airer final product. I’ve been able to find it at most grocery stores near the other flours. If you can’t find it- don’t fret. Just use all purpose flour as a 1:1 substitute.

I also noticed a difference in how the potatoes were prepared. How to prepare the potatoes is actually the part of the recipe that required the most testing on my end. Cook’s Illustrated gives an approach that involves both microwaving and baking. It worked, but I preferred to just have one method to keep it easy. I tried boiling the potatoes (which is what they did in Italy), but found that it resulted in a slightly water-logged potato that gave the gnocchi a slightly gummy texture in the end. Same went for just using the microwave. Baking gave me the best result because I think it dries out the potato just slightly, while still keeping some moisture.

The biggest thing I learned from my experience in Italy? To let go of trying to get those perfect ridges on the gnocchi. This by far was the most time consuming piece of the process. While it’s not just purely for aesthetics (some argue that the ridges give places for the sauce to cling to), the family we learned said this wasn’t essential. I’ll be honest- I had some relief. Last time I had tried to make a big batch of gnocchi for a dinner party and found myself (and our guests) desperately trying to create ridges in each individual gnocchi. Most had odd shapes and it quickly became a laborious process. Removing this step made this recipe so much easier and actually feasible to do for a small dinner party- almost handedly

A number of these tips draw inspiration or are the result of testing out multiple recipes and methods. See above to learn more about them.

Normally I don’t put measurements in ounces, but the reason I did here is to highlight the ratio of potato:flour. It’s a 4:1 ratio. 1 pound (16 ounces) potatoes to 1/4 pound (4 ounces) flour. So you can use this ratio if you prefer to use all the potatoes you have riced. You can also easily scale this up, although you do need 1 egg for this recipe, so it just requires a bit more math (1 large= 50g).

While generally I’ll either do 1 or 2x the amount, last time I made 2.5 batches of this and so we just had to measure out the eggs after whisking. America’s Test Kitchen warned me- and while the first time I was fearful enough of it not working out I followed their recipe to a t. On the second time I tried out their recipe, I decided to be a bit bolder and see if I could get away with it. Guess what- I ended up just adding in more and more flour to compensate. And it became quickly more complicated because it still felt sticky. Lesson learned: stick to the ratio.

If you can, get the right tools. There are a few simple tools that really make a difference here.

Focus on Flavor and Texture, not Aesthetics

See above for how I got to this conclusion, but I’ve found that not worrying about creating ridges on each individual gnocchi is an absolute time-saver and guess what: not a single guest says anything. Instead, I focus on creating a solid dough and making sure each gnocchi is the same size for even cooking.

Having done this Bastil Pesto Gnocchi a number of times for guests, here’s the way I like to make this recipe feasible and not take me all day. 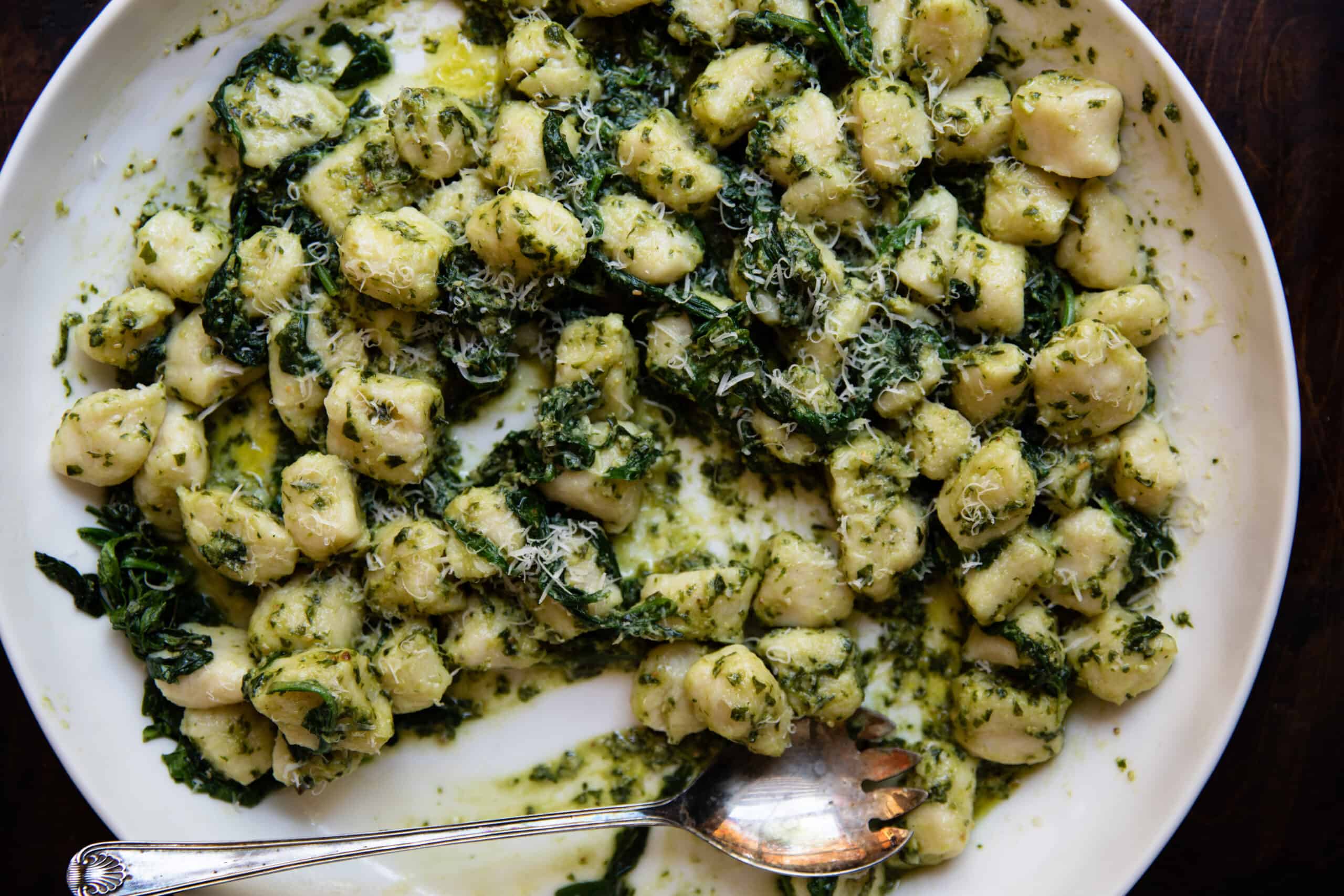