Eggplant is one of those vegetables that can go in two directions. Far too many times have I seen some sad-looking eggplant in the prepared foods section at the store or sometimes even a restaurant; there’s nothing worse than when it’s somewhat tough, leathery, and devoid of flavor. Luckily, you can just as easily achieve perfectly cooked and prepared eggplant: a slight char on the outside with a velvety soft inside that melts in your mouth. The difference between the two is HUGE. If you’re not a believer, this Easiest Garlic Roasted Eggplant will show you.

What are Asian Eggplants?

One of my absolute favorites at the market, asian eggplants usually have a season from late summer into early fall (August and September usually being peak months). Asian Eggplant includes both Chinese (the darker color) and Japanese (the lighter color. From my experience, they both cook the same and have a very similar flavor.

While Italian eggplant is a common staple at grocery stores, these types of eggplants aren’t (sadly). So I always do my best to take advantage of their season. You can sometimes find them at grocery stores, but not your commonplace ones.

I prefer these varieties because they cook a lot quicker and are a lot easier to make more tender, making them perfect for this Charred Garlic Eggplant. While they still retain water and need to be salted to extract the water, they hold a bit less water compared to an Italian eggplant, which makes them a bit more flavorful and easier to caramelize. They also have fewer seeds.

A few other eggplants you may spot at the market include fairytale eggplants. Fairytale eggplants can be a variety of purple colors and sometimes speckled. They are also quite small, but have a shape a bit more similar to an Italian Eggplant and are a bit wider. White eggplant is also a variety I’ve seen and enjoy! Both of these varieties work great in the Easiest Garlic Roasted Eggplant recipe too.

Here’s a quick video to show you how to both slice the eggplant, and brush on oil.

Why do we salt vegetables?

The science: Why salting works. 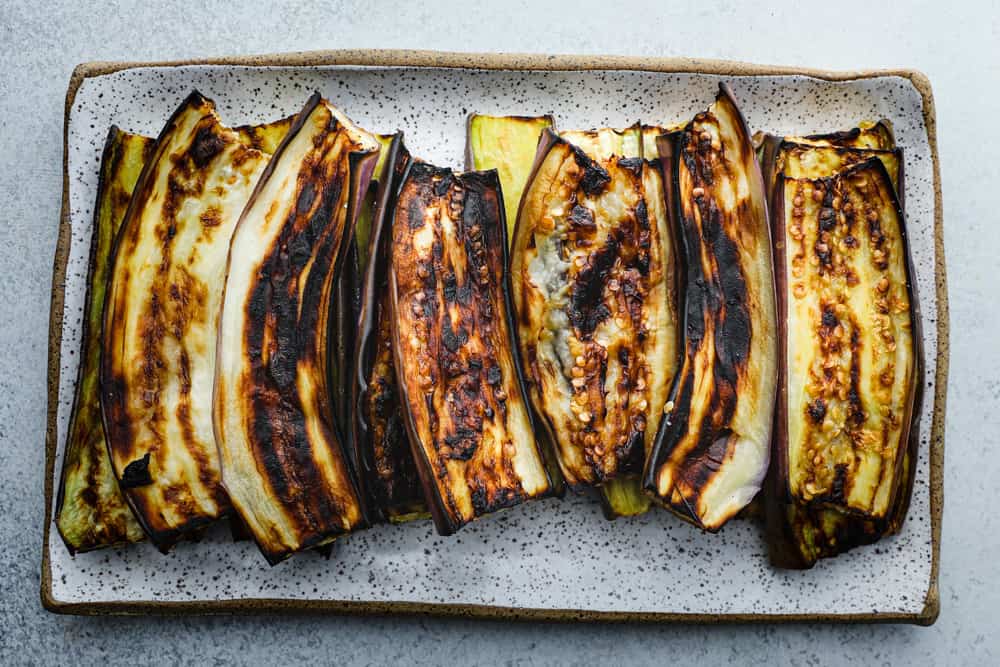