I’m gonna be honest: I’ve tried a lot of zucchini fritter recipes. A good zucchini fritter= SO GOOD. However, from my experience with multiple recipes, they often can be a bit temperamental, resulting in fritters that fall apart, have a more pancake-like texture, or suffer from watery zucchini… which also felt like it took an hour to prep. There’s nothing worse than feeling like you took painstaking measures to drain zucchini and then it still doesn’t work out.

These fritters though? They’re perfectly crispy, unfussy and hold together, and super flavorful thanks to red lentils, ginger, and turmeric (which also keeps it gluten and dairy free). Red lentils act as the base in this recipe, adding both flavor and texture while also helping bind the fritters.

Never used red lentils? Don’t worry. Nothing to fret about. This is the perfect recipe to try them out for the first time. Unlike other lentils and beans, you don’t have to pre-cook these. Literally all you do is soak them for at least 45 minutes and then process them in the food processor. They will then cook when you fry up the fritters.

One other tip- don’t grate zucchini. Instead, I use a mandolin to slice it very thinly and then slice it into thin strips. It sounds like it takes more time, but it doesn’t (and grating can be a watery mess).

P.S. If you’re wondering what a mandoline is… or thinking this is an unnecessary piece of kitchen equipment, I’m here to tell you it’s a worthwhile piece to get in your kitchen. I use it on almost a daily basis for cutting and slicing vegetables for salads and dinners. Sadly, I haven’t been able to track down my favorite mandoline I got about 10 years ago, but it’s somewhat similar to this OXO one on Amazon. This one I can attest to as well- it’s a bit larger so if you’re tight on space, I recommend the OXO one, but this is the one I convinced my mom to get and it works very well! It’s also cheaper than the OXO one. If you’re looking for something less expensive, there are options for around $20 on Amazon that have good reviews, I just haven’t used them.

This recipe is adapted from Bon Appetit- such a genius way to add in and use these red lentils! I’ve just simplified a bit and changed the flavors, but see the original recipe here.

What to serve this with: 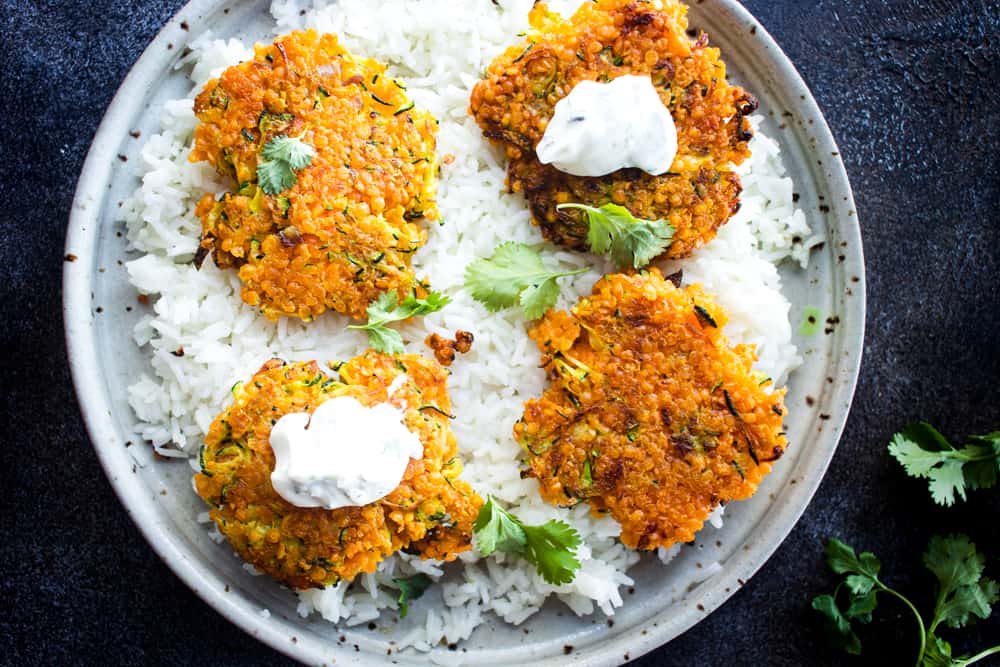 Adapted from Bon Appetit. See above for my recommendations on what to serve this with!
Servings 8 fritters (about 2 fritters/person)
5 from 2 votes
Share Email Pin Recipe
Tried this recipe?Mention @Kate_Cooks_ or tag #katecooks!