These Triple Layer Cookie Oreo Brownies are a bit out of left-field for me. About 90% of my desserts are fruit-based and usually reduced in sugar and butter, just because that’s my taste and style. However, even though it’s a different style recipe, I can use the same exact principles to make this delicious and streamlined. So how come I branched out?

Well, Matt’s favorite desserts are generally the opposite of mine: completely indulgent. Generally heavy on the chocolate and lots of sugar and butter. So this summer, I set out a goal to create a few dessert recipes that were in this style.

The other reason? Brownies are easy to give away and transfer. So many of my recipes, while easy, are usually best either the day of or are better for an after-dinner dessert. They aren’t the best to bring in to work for a treat.

Okay so if this isn’t my normal type of recipe, why should you trust me on this recipe? Why not just get a brownie recipe from someone that only bakes, right? Well first off, I get it- this isn’t normally my lane. I may not have my own original brownie recipe (until this one), but I’ve made a good amount of brownies in my day and took something I learned from each one.

From Claire Saffitz’s Dessert Person: Blooming the cocoa powder with boiling water. According to Saffitz, this helps intensify the cocoa flavor.

From Melissa Clark’s Olive Oil Brownies: The idea that oil in brownies is a seriously good one.

From Erin McDowell, Sarah Jampel, and Food52: Confirmation that you can make brownies just with cocoa powder. More importantly, they’re just as good, if not better because you have full control over how sweet you want the brownies to be and they last longerFrom Bigger Bolder Baking: Vigorously whisking the eggs to help get that crinkle top.

Yes, you really can whip this up on a weeknight.

I wanted to design these Triple Layer Cookie Brownies so you can truly can whip these up without much time or prior planning. The recipe had to be easy and simple enough to do on a weeknight and start to oven, all layers done, in 30 minutes. After doing this a few times, you can make these in your sleep.  So let’s talk about how I designed this recipe with that in mind: 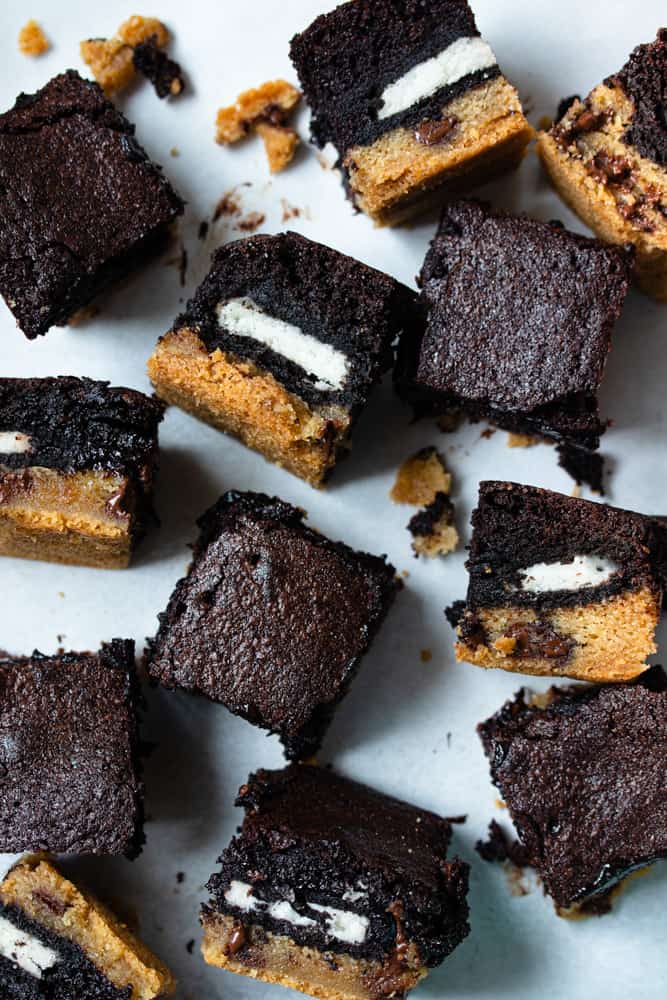 For the Brownie Layer:

Fig & Almond Biscotti (made with almond and whole wheat flour)